High Availability with libab and DigitalOcean

I’ve been using DigitalOcean more lately and reading up on Floating IPs. Floating IPs are a lot like Elastic IPs on AWS. You can allocate a floating IP and assign it to any droplet within the same data center. To redirect traffic to another droplet, you simply reassign the IP. This reassignment isn’t automatic. When the droplet with the floating IP fails, you’ll have to reassign the IP through the DO interface or use the API.

Then I thought of something interesting: using libab’s leader election and client callbacks to assign a floating IP.

libab allows you to set callbacks for certain events. One is gaining leadership. When the current node becomes a leader, libab will call the gained_leadership function that you provide. When that happens you can set the floating IP to point to the droplet the leader node is running on.

libab uses a bully algorithm to elect a leader. Of all possible nodes, only the one with the lowest ID will become the leader. In the following diagram, that’s Node 1. 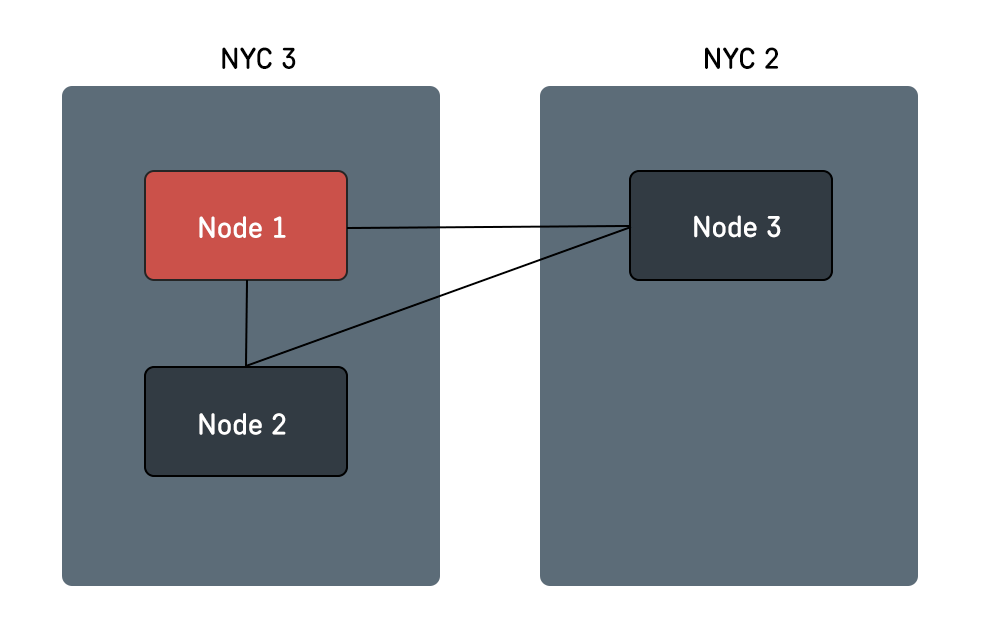 A nice property of the bully algorithm is that you can be sure some nodes will never be elected. That’s because you always need a majority to elect a leader, and the leader is the one with the lowest ID. In the diagram above, Node 3 can never become the leader (unless you add more nodes). That’s why I put it in another data center. Since it won’t be a leader, it won’t be assigned the floating IP, so I don’t need to worry about it being in the same data center.

This method is inspired by CARP. I used CARP when I did web hosting to setup redundant firewalls using OpenBSD. It uses a similar bully algorithm approach to assign an IP, but in that case it’s the gateway IP for a network.

To test this out, I wrote a small Go program that uses the libab cgo bindings and the DigitalOcean API. I was able to correctly reassign a floating IP when I terminated the program and the droplet itself.

The only problem I noticed was that it took a while for the IP to get rerouted. I kept ping running and I noticed the floating IP was unresponsive to pings for 300 seconds during the transition. That’s quite unreasonable for a HA setup, but I’m sure it’s going to be much better.

Another approach to HA

Vultr, a DigitalOcean clone operated by Choopa, also offers a floating IP feature, but they take it to the next level. They allow you to use BGP to setup HA. This approach doesn’t need a failure detector since you can use anycast to send traffic to an IP to multiple instances at the same time, but that’s beyond the scope of this post.

Again, this program doesn’t do much since it’s a test and it just runs a libab node. I can imagine this being a part of another web server or some important network service that you’d want to make highly accessible. It’s nice to finally use libab for something useful!